by The Hearsum Collection | Oct 16, 2017 | Stories from the Collection 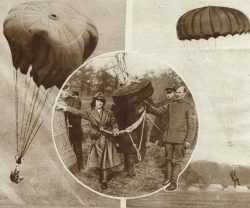 As part of the Friends of Richmond Park History Project, volunteers are researching notable stories from the history of the Park. One such escapade was discovered in an old French newspaper cutting acquired by the Hearsum Collection.  It revealed that almost 100 years ago Richmond Park was the setting for a feat of pioneering skill and daring when, at the tender age of 17, Sylva Boyden became one of the first women in England (maybe even the first) to jump from a great height and use a packed parachute to land safely.

Further research revealed that Sylva had come to the Park to watch the Royal Flying Corps test a new parachute, and quickly determined to have a go herself. To get permission she lied about her age, claiming a mature 21, and giving her grandmother’s name to avoid recognition.  She clearly had a talent and made three successful balloon jumps that day with a ‘Guardian Angel’ parachute.

This redoubtable pioneer went on to become one of the first women to make parachute jumps from aircraft and become known as the ‘famous English airgirl’, interviewed by the New York Times. She appeared in RAF pageants and air shows in Britain and Europe, often as the only female participant.  During her career she made some 150 jumps, driven by the thrill of the experience, and by the desire to demonstrate the need to make life-saving parachutes compulsory equipment on aircraft. 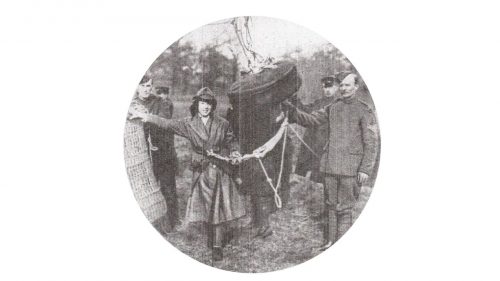